Born in Rotterdam, Rem Koolhaas spent four years of his youth in Indonesia, where his father served as director of a newly formed cultural institute. Following in the footsteps of his literary father, Koolhaas began his career as a writer. He was a journalist for the Haase Post in The Hague, and later tried his hand at writing movie scripts.

Koolhaas's writings won him fame in the field of architecture before he completed a single building. After graduating from the Architecture Association School in London in 1972, he received the Harkness Fellowship for travel and research in the United States. During this period, he wrote Delirious New York, which he described as a "retroactive manifesto for Manhattan" and which critics hailed as a classic text on modern architecture and society.

In 1975, Koolhaas founded the Office for Metropolitan Architecture (OMA) in London with Madelon Vriesendorm and Elia and Zoe Zenghelis. Focusing on contemporary design, the company won a competition for an addition to the Parliament in The Hague and a major commission to develop a master plan for a housing quarter in Amsterdam.

In 1987, Koolhaas was hired to design and build the Netherlands Dance Theater in The Hague. Composed of three areas, including a stage and auditorium, a rehearsal studio, and a complex of offices and dressing rooms, the theater garnered Koolhaas immediate acclaim.

Delirious New York was reprinted in 1994 under the title Rem Koolhaas and the Place of Modern Architecture. The same year, he published S,M,L,XL in collaboration with the Canadian graphic designer Bruce Mau. Described as a novel about architecture, the book combines works produced by Koolhaas's Office for Metropolitan Architecture with photos, plans, fiction, cartoons and random thoughts. The title refers to the way the architect decided to arrange the book: instead of a chronological timeline, it is organized by project size.

Koolhaas has designed a number of residences, cultural buildings and an “educatorium” a name alluding to a factory of learning, a shared facility at Utrecht University, among many other projects and planning commissions. In a major competition, Koolhaas was selected to design the new Campus Center at Illinois Institute of Technology in Chicago, one of the first new structures on the historic campus designed by Mies Van der Rohe. In 1999, he was awarded the commission to design the new main library for the city of Seat ...

Rem Koolhaas, a 56 year-old architect from the Netherlands, has been named the Pritzker Architecture Prize Laureate for the year 2000.

In a development in Fukuoka, Japan, his Nexus Housing is a project consisting of 24 individual houses, each three stories high. Koolhaas also has projects in Portugal, Korea and Germany, the latter being a new embassy for the Netherlands in Berlin, which is currently under construction.

He has a number of major commissions in the United States that will come to fruition within the next two years: a student center for the predominantly Mies van der Rohe campus of the Illinois Institute of Technology in Chicago and a new central public library for Seattle, as well as buildings in San Francisco and Los Angeles. Koolhaas has also been working for Universal Studios, owned by the Seagram Company, on a master plan and headquarters buildings.

Koolhaas’ work and ideas often spark critical debate in areas in which he has been working. While his radical design for the Seattle Public Library has won praise there, initial reports described Seattle as “bracing for a wild ride with a man famous for straying outside the bounds of convention.”

“It seems fitting that as we begin a new millennium, the jury should choose an architect that seems so in tune with the future,” says Thomas J. Pritzker, president of The Hyatt Foundation, “In fact, Koolhaas has been called a prophet of a new modern architecture. It’s not surprising that the Museum of Modern Art has had not one, but two exhibitions devoted to his ideas.”

The Bordeaux house, named as Best Design of 1998 by Time magazine, is one of his most important works, designed to fill the needs of a couple whose old house had become a prison to the husband who has been confined to a wheel chair following an automobile accident. Koolhaas proposed a home in three sections, actually what he prefers to describe as three houses, one on top of the other. The lowest part he calls “cave-like, a series of caverns carved out from the hill for the most intimate life of the family.” The “top house” is divided into spaces for the couple, and spaces for their children. Sandwiched in between is an almost invisible glass room, half inside, half outside, meeting the grade on one side, where the client has his own room for living. This room is actually a vertically moving platform, 3 X 3.5 meters (10 X 10.75 feet ), functioning as an elevator, which allows the man access to all levels. One wall of the elevator is a continuous surface of shelves providing access to books for his work.

Koolhaas published his first book, Delirious New York , in 1978. Author James Steele described it as “an offbeat but well-expressed and incisive look at the pattern of urban growth.” A Los Angeles Times article described the book as “bulging with novel theories and images about that city—among them an image of the Chrysler Building in bed with the Empire State Building.”

More recently, he wrote S, M, L, XL, which Time magazine called “the ultimate coffee-table book for a generation raised on both MTV and Derrida.” The Pritzker jury considers Koolhaas’ writings so important that the prize citation says he is as well known for his books, plans and academic explorations as he is for his buildings.

Pritzker Prize jury chairman, J. Carter Brown, commented, “Rem Koolhaas is widely respected as one of the most gifted and original talents in world architecture today. The leader of a spectacularly irreverent generation of Dutch architects, his restless mind, conceptual brilliance, and ability to make a building sing have earned him a stellar place in the firmament of contemporary design.”

Bill Lacy, the executive director of the Pritzker Prize, wrote in his 1991 book, 100 Contemporary Architects, “As an architect/philosopher/artist, Dutchman Rem Koolhaas has expanded and continues to expand our perceptions of cities and civilization.”

Lacy, who is president of the State University of New York at Purchase, added, “Koolhaas has amassed an intriguing array of brilliant projects that continually blur the line between urban design and architecture. He has a rare talent and ability to think in design terms that range from the smallest construction detail to the concept for a regional master plan.”

The formal presentation of what has come to be known throughout the world as architecture's highest honor will be made at a ceremony in Jerusalem, Israel on May 29, 2000. At that time, Koolhaas will be presented with a $100,000 grant and a bronze medallion. He is the first Pritzker Laureate from the Netherlands, and the 23rd to be honored.

Rem Koolhaas is that rare combination of visionary and implementer—philosopher and pragmatist—theorist and prophet—an architect whose ideas about buildings and urban planning made him one of the most discussed contemporary architects in the world even before any of his design projects came to fruition. It was all accomplished with his writings and discussions with students, many times stirring controversy for straying outside the bounds of convention. He is as well known for his books, regional and global plans, academic explorations with groups of students, as he is for his bold, strident, thought provoking architecture.

His emergence in the late seventies with his book Delirious New York was the start of a remarkable two decades that have seen his built works, projects, plans, exhibitions and studies resonate throughout the professional and academic landscape, becoming a lightning rod for both criticism and praise.

One of his earliest plans for the expansion of the Dutch Parliament aroused such interest that other commissions followed. The Netherlands Dance Theatre in The Hague was one of the first completed projects to garner critical acclaim from many quarters. Since then, Koolhaas’ commissions have ranged in scale from a remarkably inventive and compassionate house in Bordeaux to the master plan and giant convention center for Lille, both in France. The Bordeaux house was designed to accommodate extraordinary conditions of use by a client confined to a wheel chair without sacrificing the quality of living. Had he only done the Bordeaux project, his niche in the history or architecture would have been secure. Add to that a lively center of educational life, an Educatorium (a made up word for a factory for learning) in Utrecht, as well as housing in Japan, cultural centers and other residences in France and the Netherlands, and proposals for such things as an Airport Island in the North Sea, and you have a talent of extraordinary dimensions revealed.

He has demonstrated many times over his ability and creative talent to confront seemingly insoluble or constrictive problems with brilliant and original solutions. In every design there is a free-flowing, democratic organization of spaces and functions with an unselfconscious tributary of circulation that in the end dictates a new unprecedented architectural form. His body of work is as much about ideas as it is buildings.

His architecture is an architecture of essence; ideas given built form. He is an architect obviously comfortable with the future and in close communication with its fast pace and changing configurations. One senses in his projects the intensity of thought that forms the armature resulting in a house, a convention center, a campus plan, or a book. He has firmly established himself in the pantheon of significant architects of the last century and the dawning of this one. For just over twenty years of accomplishing his objectives—defining new types of relationships, both theoretical and practical, between architecture and the cultural situation, and for his contributions to the built environment, as well as for his ideas, he is awarded the Pritzker Architecture Prize.

The Jerusalem Archaeological Park, Israel’s most important antiquity site, extends to the Temple Mount on the north, the slope of the Mount of Olives and the Kidron Valley on the east, and the Valley of Hinnom on the west and the south. This exceptional area, which has captivated the world’s imagination throughout history, has been designated as an archaeological park and open museum. The Park bears witness to events spanning some 5000 years, beginning with the Bronze Age and continuing through the days of the Israelite monarchy in the First Temple period. The splendors of the Second Temple and the impressive architecture of King Herod, dating to the second half of the first century B.C.E. are key elements in the park. Remains and monumental structures dating to the Christian and Muslim periods are also clearly visible.

Jerusalem’s Archeological Park provided the most ancient of the venues for the award ceremony of the Pritzker Architecture Prize on May 29, 2000. The event began with a reception on a landing at the top of the monumental staircase along the south wall of the Temple Mount. The presentation ceremony took place at Herodian Street, which was followed by dinner in the courtyard of Umayyad Palace. Participating in the ceremony were J. Carter Brown, Chair of the Jury, Ehud Olmert, Mayor of Jerusalem, Thomas J. Pritzker, President of the Hyatt Foundation, and the 2000 Laureate, Rem Koolhaas. 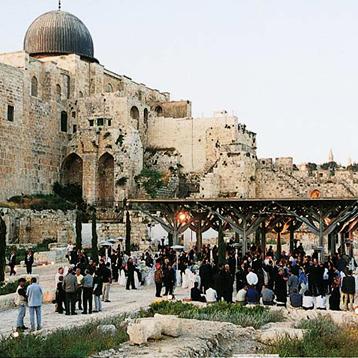