Sverre Fehn (1924-2009) has long been recognized in Europe as one of Norway's most gifted architects. Categorized as a modernist by most architectural writers, Fehn himself says, “I have never thought of myself as modern, but I did absorb the anti-monumental and the pictorial world of LeCorbusier, as well as the functionalism of the small villages of North Africa. You might say I came of age in the shadow of modernism.”

“I always thought I was running away from traditional Norwegian architecture,” says Fehn, “but I soon realized that I was operating within its context. How I interpret the site of a project, the light, and the building materials have a strong relationship to my origins.”

Born in Kongsberg, Norway in 1924, he attended the Oslo School of Architecture and received his degree in 1949.

Fehn, along with Norberg-Schulz, Grung, Mjelva and Vesterlid, all other Norwegian architects of the same generation, and Jørn Utzon (the Danish architect who later gained fame for the Sydney Opera House, Australia) formed an organization which was the Norwegian branch of CIAM (International Congress of Modern Architecture), called PAGON (Progressive Architects Group Oslo Norway) that had a profound influence, creating architecture which had a firm foundation in the Modern Movement, but was expressed in terms of the materials and language of their own region and time.

Fehn received the French State Scholarship which allowed him to live in Paris in 1953 and 1954. In reminiscing about that period, Fehn recalls that it was his generation that distanced itself from Le Corbusier and his urbanistic world.

When asked what the most important part of his architecture is, Fehn has replied that it is above all, the construction, be it wood or concrete, and harmony, rhythm, and honesty in the use of those materials. He calls the act of building brutal, and elaborates, “When I build on a site in nature that is totally unspoiled, it is a fight, an attack by our culture on nature. In this confrontation, I strive to make a building that will make people more aware of the beauty of the setting, and when looking at the building in the setting, a hope for a new consciousness to see the beauty there, as well.”

Fehn considers light another material of construction. And nowhere is this more evident that in the Venice Biennale Nordic Pavilion. The building consists of concrete bearing walls, with a two-way concrete clear-span roof with openings for tree trunks where necessary. The building is literally built around growing trees. The leafy branches of the trees, and the design of the roof beams to diffuse the light from the sun, provide the interior exhibition space with a soft light that has been characterized as Nordic.

His Glacier Museum has been hailed as a major landmark in contemporary architecture. The building stands on the plain carved out by the Josstedal Glacier at the mouth of the Fjaerland Fjord. The museum is the center of a panorama formed by the steep mountainsides and the fjord with the glacier on top. As you approach the site by boat, the white concrete of the museum seems to lie as a rock on the mountainside, says Fehn. The rocks that lie on the hills of the Scandinavian landscape have always had an attraction for me. These rocks were the inspiration for building in concrete.

In 1971, he became a professor of architecture at his alma mater in Oslo, where he taught until 1993. Fehn has lectured extensively in Europe; including Vasa University, Finland, Denmark's Architectural School of Aarhus, the Stockholm Architectural Association, the University of Trondheim, the International Laboratory of Architecture & Design in Urbino, Italy, the Architectural Association in London. He has also lectured in Paris, Stuttgart, Germany; Barcelona, Spain; and Rome. In the United States, he has been a guest lecturer at The Cooper Union in New York City, Cranbrook Academy of Arts in Bloomfield Hills, Michigan, Massachusetts Institute of Technology, and Harvard, Cornell, and Yale universities. His work was exhibited at the Museum of Modern Art in 1968 ...

Sverre Fehn, a 72 year-old architect who lives and works in Oslo, Norway has been named the 1997 Laureate of the Pritzker Architecture Prize. In making the announcement, Jay A. Pritzker, president of The Hyatt Foundation, which established the award in 1979, quoted from the jury's citation which describes Fehn's architecture as "... a fascinating and exciting combination of modern forms tempered by the Scandinavian tradition ..." Fehn is the twentieth architect in the world to be selected for his profession's highest honor which bestows a $100,000 grant when the formal presentation is made on May 31 in Bilbao, Spain.

Pritzker Prize jury chairman, J. Carter Brown, commented that Fehn's work "... embodies the Pritzker Prize ideal of architecture as art." And from fellow juror, author Ada Louise Huxtable, "Sverre Fehn represents the best of twentieth-century modernism ... this is a unique life's work of extraordinary richness, perception and quality." From juror Charles Correa, a much honored architect from Bombay, India, comes the praise, "... a wonderfully lyrical and inventive architectonic language which, like all true art, is both rigorous and deeply humane." Juror Toshio Nakamura, editor and architectural writer from Japan called Fehn's work "... remarkably specific in his approach to design in terms of its regional inflection, material, imagination, and implied geometry ..."

Most of Fehn's work is in his native Norway, with Sweden and Denmark taking a close second. In 1958, he gained international attention for his Norwegian Pavilion at the Brussels World Exhibition, and again in 1962 for his Nordic Pavilion at the Venice Biennale.

In recent years, two of his museum projects have captured widespread attention: one completed in 1991 is the Glacier Museum built on the plain carved out by the Jostedal Glacier at the mouth of the Fjaerland Fjord. The museum is the center of a panorama formed by the steep mountainsides and the fjord with the glacier on top. A second project, the Aukrust Museum, celebrates the work of a famous Norwegian painter/writer, named Kjell Aukrust. Both of these projects were preceded by another project called the Hedmark Cathedral Museum in Hamar, Norway, which was completed in 1979. The latter is the site of an early fourteenth century manor house and bishopric. Fehn built in and around the ruins to preserve this historic site.

He has designed numerous private residences, a home for the elderly, the inspiration for which he credits Mies van der Rohe, and many other types of buildings. One of the more controversial is the enlargement of the National Theatre of Copenhagen, where critics have hailed the design as having "... the magnificent spaciousness of cathedral-like character."

Bill Lacy, executive director of the Pritzker Prize, quoted further from the formal citation which states, "Eschewing the clever, the novel and the sensational, Fehn has pursued his version of twentieth century modernism steadily and patiently for the past fifty years. With one carefully designed project after another, he has displayed a virtuosity and creativity that now ranks him among the leading architects of the world."

Lacy, who is an architect himself and president of the State University of New York at Purchase, added his own comment, "Fehn's architecture is poetic, thoughtful, even sentimental—bold and at the same time humble. Not since Louis Kahn has an architect been so enthralled with materials and their architectural consequences."

Fehn was one of the post World War II generation of architects who emerged from the Architectural School of Oslo, receiving his diploma in 1949. At that time, Finnish architect Alvar Aalto was a strong influence on European architecture, and in particular, Arne Korsmo, one of Norway's leading architects. Korsmo became a great friend and mentor to Sverre Fehn now lives in a house designed by Korsmo.

The prize presentation ceremony moves to different locations around the world each year, paying homage to historic and contemporary architecture. This year, the award will be given in the nearly completed Guggenheim Museum Bilbao in the Basque Country of northern Spain on Saturday, May 31. Designed by 1989 Pritzker Laureate Frank Gehry, the building is scheduled to be completed for a formal opening in October. It has already been hailed by King Juan Carlos of Spain as, "... the best building of the twentieth century." This is the second consecutive year that the prize ceremony has been held in a construction site. Last year, it was presented to Spanish architect José Rafael Moneo at the unfinished Getty Center, designed by yet another Pritzker Laureate who received the award in 1984, Richard Meier.

The architecture of Norwegian Sverre Fehn is a fascinating and exciting combination of modern forms tempered by the Scandinavian tradition and culture from which it springs. He gives great primacy in his designs to the relationship between the built and the natural environment.

Eschewing the clever, the novel and the sensational, Fehn has pursued his version of twentieth century modernism steadily and patiently for the past fifty years. With one carefully designed project after another, he has displayed a virtuosity and creativity that now ranks him among the leading architects of the world.

The Norwegian Pavilion at the 1958 Worlds Fair in Brussels gave early notice of his special talents. The Nordic Pavilion at the Venice Biennale a few years later was a confirmation. Since those early works, Fehn has proven that he is an architect for all seasons with many dimensions, allowing him to be as comfortable with the design of furniture, exhibitions and objects as he is with architecture. His eloquence with materials is easily matched by his poetic command of words.

The geography of place and time, with a range of diversity that includes primitive Morocco and today's New York City, as well as an amalgam of a multitude of influences have played an important role in Fehn's development. Some of the great architects of the century Louis Kahn, Frank Lloyd Wright, LeCorbusier, Alvar Aalto, Mies van der Rohe, Jean Prouvé, as well as his fellow countryman and mentor Arne Korsmo have provided inspiration, but Fehn's results have a singular individuality and originality.

He has avoided fads and fashions that have influenced much of contemporary architecture, patiently evolving his own individual style, always seeking improvement.

He has broken new ground in giving modern architectural form to elements of his native Norwegian landscape northern light, grey stone and verdant green forest blending fantasy and reality into buildings that are both contemporary and timeless.

Nowhere is this more evident than in the museum at Hamar where in addition to balancing the requirements of site and program, the combination of ancient and contemporary had to be in harmony.

Sverre Fehn's body of work stands as testament to the talent, creativity and sensitivity of one of the master architects of the world It is fitting that he should be the 1997 Laureate of the Pritzker Architecture Prize.

The construction site of The Guggenheim Museum, Bilbao, Spain

The Guggenheim Museum–Bilbao, in northern Spain, opened in the fall of 1997. On May 31, 1997, prior to the museum’s opening, the Pritzker Architecture Prize ceremony honoring Sverre Fehn was held there in the great central atrium space. Designed by architect Frank Gehry, it has been hailed as one of the most important museum buildings of the twentieth century. Sited along the Nervion River, the sculptural building was a key element in the architectural and urban regeneration of the city.

The exterior is clad in titanium panels that reflect the varying conditions of natural night. The hues and luminosity of the building’s finish appear to change throughout the day and night. While the Guggenheim-Bilbao contains all the necessary elements of a museum—galleries, temporary exhibition space, visitor services and administration, the richness of spaces is unparalleled. The galleries are organized around a vertical atrium that rises more than 150 feet high and bathed in light from its many windows. Three levels of galleries connect to the atrium with catwalks and vertical circulation, further animating the space as visitors flow in and out of the galleries. 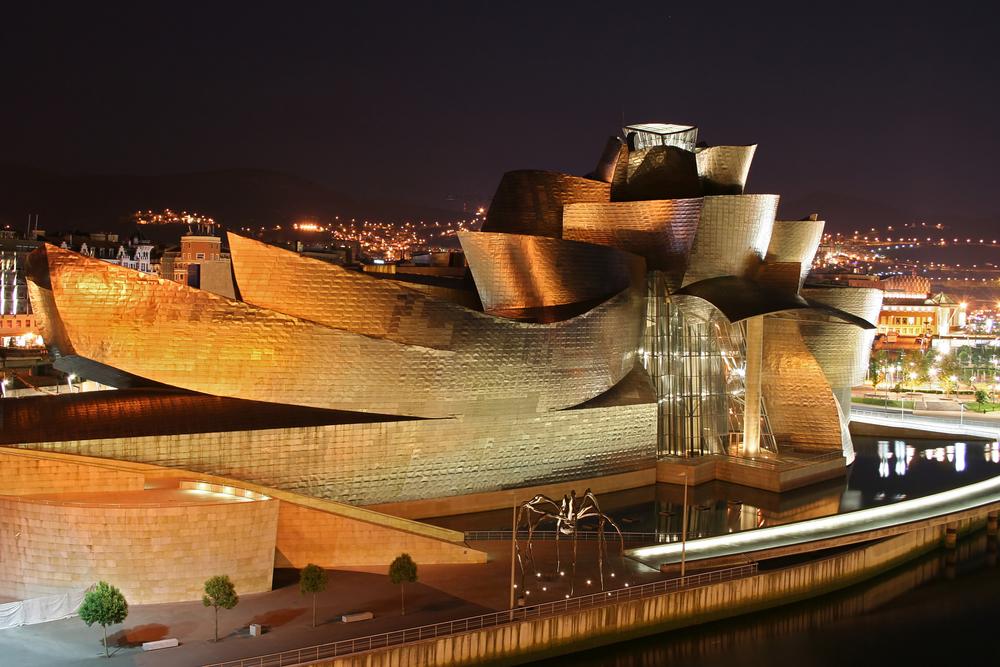