Kenzo Tange (1913-2005), winner of the 1987 Pritzker Architecture Prize, is one of Japan’s most honored architects. Teacher, writer, architect, and urban planner, he is revered not only for his own work but also for his influence on younger architects. He was born in the small city of Imabari, Shikoku Island, Japan in 1913. Although becoming an architect was beyond his wildest dreams as a boy, it was Le Corbusier’s work that stirred his imagination so that in 1935, he became a student in the Architecture Department of Tokyo University. In 1946, he became an assistant professor at Tokyo University, and organized the Tange Laboratory. His students included Fumihiko Maki, Koji Kamiya, Arata Isozaki, Kisho Kurokawa, and Taneo Oki.

Tange was in charge of the reconstruction of Hiroshima after World War II. The Hiroshima Peace Center and Park begun in 1946 made the city symbolic of the human longing for peace. Architecturally, the Peace Center shows a deep understanding of traditional culture while at the same time is a signpost in the search for a modern style in Japan.

Tange research and interest in urban planning extended throughout his career. His doctorate, completed in 1959, was titled, "Spatial Structure in a Large City," an interpretation of urban structure on the basis of people's movements commuting to and from work. His "Plan for Tokyo 1960" was the Tange Team's logical response to these problems, giving thought to the nature of the urban structure that would permit growth and change. His Tokyo Plan received enormous attention world-wide, for its new concepts of extending the growth of the city out over the bay, using bridges, man made islands, floating parking and mega structures. Other urban design and planning projects were begun in 1967 for the Fiera District of Bologna, Italy, and for a new town with residences for 60,000 in Catania, Italy.

For his Tokyo Cathedral of Saint Mary, he visited several medieval Gothic examples. "After experiencing their heaven-aspiring grandeur and ineffably mystical spaces," he says, "I began to imagine new spaces, and wanted to create them by means of modern technology."

Yamanishi Broadcasting and Press Center (1966) in Kofu, Japan uses many of Tange's new theories—cylinders house staircases, elevators, air conditioning and electrical equipment systems. The horizontal spaces connecting them are likened to the buildings along a street. Some plots are vacant and others are occupied. An important aspect was the expansion potential of the complex. Open spaces between floors, which now serve as terraces and roof gardens, could be enclosed when needed.

In the year in which he won the Pritzker Prize, Tange revealed his plans for the new Tokyo City Hall Complex. Since built, the complex comprises an assembly hall, a civic plaza, a park, and two tower buildings. The Akasaka Prince Hotel (1982) in Tokyo has become an important landmark. Others include the Sogetsu Center (1957), the Hanae Mori Building (1979), the Hyogo Prefecture Museum of History (1982), the Ehime Prefecture Culture Center (1985), the Toin School (1986) in Yokohama,—and new projects that are still in the design stage, such as the Yokohama Museum of Art, and the Tokyo Headquarters of the United Nations University.

Tange's only completed project in the United States, to date, is his expansion of the Minneapolis Art Museum, originally designed in 1911 by McKim Mead & White in the neoclassic style. Completed in 1975, the expansion, almost doubling the size of the original 120,000 square foot structure, was accomplished with large symmetrical wings. Other works outside of Japan include major buildings in Singapore: the Overseas Union Bank, the GB Building, the Telecommunications Centre, and the Nanyang Technological Institute.

In all of his projects, there is a recurrent theme that Tange has verbalized, "Architecture must have something that appeals to the human heart, but even then, basic forms, spaces and appearances must be logical. Creative work is expressed in our time as a union of technology and humanity. The role of tradition is that of a catalyst, which furthers a chemical reaction, but is no longer detectable in the end result. Tradition can, to be sure, participate in a creation, but it can no longer be creative itself."

Kenzo Tange, one of the world's most honored architects, today became the 1987 Laureate of the Pritzker Architecture Prize. He is the ninth recipient of what has come to be known as the most prestigious award in the profession. A native of Japan, Tange is the fifth recipient from outside the United States.

Although the major portion of Tange's work has been in Japan, including the world renowned stadiums for the 1964 Olympics held in Tokyo, he has designed and built in China, Singapore, Australia, Malaysia, Nepal, Saudi Arabia, Iran, Kuwait, Nigeria, Italy, Yugoslavia and the United States.

Jay A. Pritzker, president of The Hyatt Foundation, which established the prize in 1979 to reward a creative endeavor not honored by the Nobel Prizes, presented a $100,000 tax-free grant to Tange today at The Museum of Modern Art. A formal award ceremony will be held at the Kimbell Art Museum in Fort Worth, Texas on May 2.

Pritzker praised Tange for his "wide-ranging creative activities, not only as an architect and urban planner, but as a teacher and writer, researcher and historian. His theories on the informational society, and his search for a design expression for that society, have produced not only a great body of built work, but also have stimulated the quest for an architecture that can again elevate the human spirit. Mr. Tange has been quoted as saying, 'architecture must have something that appeals to the human heart.' The jury has unanimously agreed that this life's work has done that ... and more."

In revealing the 1987 Laureate, noted author and journalist Brendan Gill, who is secretary to the Pritzker jury, said of Tange, "He has shaped, as architect, teacher, and philosopher of architecture, half a century of Japanese building design and urban planning."

Gill continued, "In his youth, he was influenced by Le Corbusier, and later, while teaching at MIT, by his close friend Eero Saarinen. Among his students and colleagues in Japan, have been Fumihiko Maki and Arata Isozaki."

In making the award to Tange, the jury's citation read in part, as follows: "Given talent, energy, and a sufficiently long career, one may pass from being a breaker of new ground to being revered as a classic. This has been the happy fate of Kenzo Tange, who in his seventh decade, is celebrated as an architect of international stature. His stadiums for the Olympic Games held in Tokyo in 1964 have been described as among the most beautiful buildings of the twentieth century."

Tange, who is 73, became interested in architecture while studying in another field. He entered the Architecture Department of Tokyo University in 1935, and began winning competitions and awards in his own country shortly after graduating. He received his doctorate in 1959, followed by numerous honorary doctorates around the world.

Given talent, energy, and a sufficiently long career, one may pass from being a breaker of new ground to becoming a classic. This has been the happy fate of Kenzo Tange, who in his eight decade is celebrated as an architect of international reputation. Along with his practice, he has been a leading theoretician of architecture and an inspiring teacher; among the well-known architects who have studied under him are Fumihiko Maki and Arata Isozaki. His stadiums for the Olympic Games held in Tokyo in 1964 are often described as among the most beautiful structures built in the twentieth century. In preparing a design, Tange arrives at shapes that lift our hearts because they seem to emerge from some ancient and dimly remembered past and yet are breathtakingly of today.

The Kimbell Art Museum is widely regarded as one of the most outstanding examples of twentieth century American architecture. Designed by the American architect Louis I. Kahn (1901–1974), the Museum has won wide acclaim since its opening in 1972. In his design for the Kimbell, Kahn emphasized the low, horizontal aspect of the building with separate reinforced concrete vaults, forming two exhibition spaces and a central entrance lobby, and creating three open porticos on the outside. The 120,000 square foot building is widely recognized for the powerful spaces defined by parallel barrel vaults. The spatial rhythm extends to the exterior water-features on the west side of the building, and resolves into a number of paths and garden areas on the grounds.

Kahn’s innovative use of natural light greatly enhances the experience of the art. Kahn envisioned a museum with “the luminosity of silver.” In his design, “narrow slits to the sky” (as he described the skylights) admit natural light, which is dispersed onto the underside of the rhythmic vaults and down the walls. Courtyards, lunettes, and light slots vary the quality and intensity of the light. The building’s gracious proportions, fine craftsmanship, and beautiful landscaping add further to the sense of serenity and restraint.

The 1987 ceremony awarding Kenzo Tange of Japan the prize took place on May 2, 1987 at the Kimball Art Museum. Speakers included representatives of the Kimball Museum, J. Carter Brown, Chair or the Pritzker Prize Jury, Carlton Smith, Secretary to the Jury, Jay Pritzker, founder of the Prize and Kenzo Tange, the 1987 laureate. 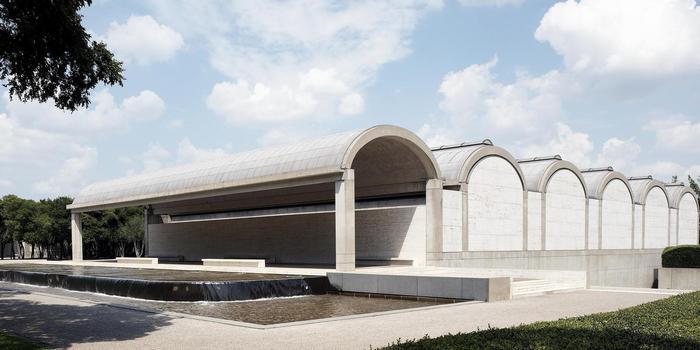